We are trying to bring the grocery bill down. Last week we did a really big shop, so this week it was more fill in. We stayed in town and only hit three stores-the IGA, Safeway, and Dollar Tree. The Dude and I both went through our Safeway Just 4 U cards and got our best deals. Luigi wanted cereal, and had quite the conversation with us about the importance of buying cereal and the types he was hoping for. The IGA had a sale on cereal. We got a few boxes, some at $2.50 a box, some at $2 a box. I decided that I would talk to him about cereal, but bought it today because I told him I would. I headed to the milk aisle. In our area, $3 or more per gallon has been the norm, although lately we have been able to find it on sale for $2.50 a gallon pretty consistently. I was planning to pick up some milk for $2.89 a gallon. However, when I got to the aisle, I saw a handwritten sign that said marked milk was 50 cents. I was feeling pretty happy, 50 cents off $2,89 is a good price. However, a closer look revealed that the milk was 50 cents. It was for gallons with a sell by date of today. I did a small happy dance, and grabbed a few 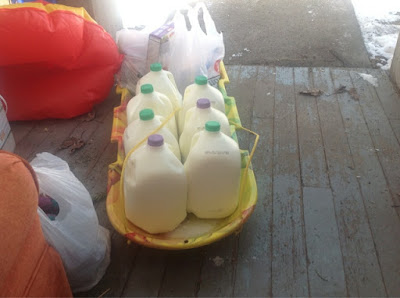 We are freezing those we can’t use right away (currently on my back porch, which is below freezing) but I expect that this will last us about a week. We go through milk pretty quickly. My 7 gallons cost $3.50, or what a gallon typically costs when not on sale.

We went to the Dollar Tree for toilet cleaner and I found some cereal there, 14 ounce boxes for $1. I got 2. We picked up a light for our lava lamp, a bottle of spray cleaner as well as the toilet cleaner, and a few bags of sugar free hard candy, which is our South Beach indulgence (40 pounds lost and holding!). At Safeway, we got some produce and scored some turkey sausage on clearance for 75% off. This brought it down to a dollar a pound. We stocked up.

This afternoon I had the cereal talk with the boys. It went like this: You asked me to buy cereal, so I bought lots of different kinds. However, we have to rethink our use of cereal. That is $15 in cereal. We are trying to spend around $90 per week on all groceries, and so $15 represents a significant portion, and it is basically snack food. For instance, this box of Honeycomb was $2.50. You all can eat that in about day (realistically, the three of them can blow through a box in one sitting). And it isn’t just cereal, there is also milk. So, let’s say you had that for breakfast. $2.50 for a box of cereal and $1.50 for half a gallon a milk if it is $3. That is $4.00 for breakfast for the three of you and you will need to eat something else soon because cereal is not going to fill you up for long. Compare that with bagels. We pay $1.85 for 6 bagels. Add half a package of cream cheese for an additional 50 cents and the whole family has a filling breakfast for $2.35, with a bagel left over. We need to start considering cereal as occasional treat food, not a staple. Granola is okay because we tend to sprinkle it on yogurt, not gulp it by the bowlful.(We have made a few attempts at making our own granola and they have failed, but if we can find a substitute for granola, we will). From now on, I will no longer spend more than $1 (or maybe $1.50) on a 13-15 ounce box of cereal. When we do buy it, you will need to make it last.

Luigi asked if we can occasionally buy more expensive cereals and I said yes occasionally. The Dude chimed in and told them they need to make this cereal purchase last 2 weeks. They were all pretty amiable about it. We will see how it goes in the long run, but I think this is a good start. In other good news, Rin has figured out that it would be easier to set aside half of his allowance as soon as he gets it, in order to save. We told him we can take it right off the top, so he wouldn’t even have the temptation of the money. He said he would need some kind of documentation from us as to where the money is (smart kid 🙂 ) but thought that could work. He is 13 and already embracing the principle of “pay yourself first.”
And I will leave you with this photo of the littlest dog in our lives, the little red monster who is the most fiercely loyal dog I have ever met. Ms. Lucy Lu. I am including this picture for no reason at all except that she is adorable and looks so noble in this photo. 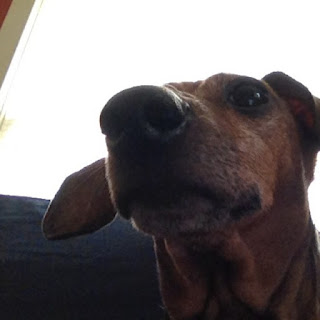 Lucy is commanding us to hand over that extra bagel!

Finding My Way Out of the Internet